A longer version of the interview I did with Christopher Irving for Creator-Owned Heroes #7 has been posted on the Graphic NYC site. I sound a lot more negative than I meant to and my fall-back Brooklyn native style of speaking didn't help things much, but it's got some pictures and I called myself a jerk and there's some talk of my days in comic book retail and it's not super-long...so, as you believe, so shall you do.

Speaking of super-long conversations, here's a 2-hour interview I did with Wendi Freeman for the Double Page Spread podcast, edited down from an even longer talk (!). It was a fun interview but it went into some unexpected places (depression, anxiety, childhood, the relationship between those things and being a fan) and it got a little intense, for lack of a better way of putting it. I don't know how much of that part of the interview was used, but Wendi mentions those hot-button comic book topics (Depression! Yay!) in the episode description, so, I'm assuming it's in there somewhere. 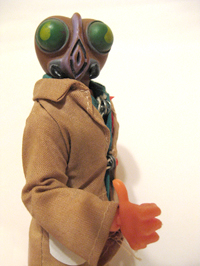