Hey, folks. If you live on Staten Island -- like I do -- well, I pity you. But it does mean you can see me interviewed this Tuesday for an episode of the Super Live Adventure Podcast, which is run by two guys also stuck here on this forgotten and misbegotten borough of NYC.

Here's the information, for your information, about the recording this Tuesday evening on the Island of Satan: 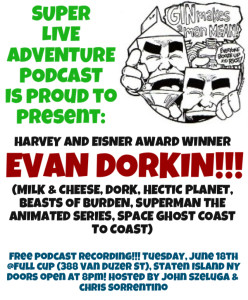 But wait, there's more: If you're someone who really likes podcasts, and really likes comic books, and really likes the idea of hearing me and several other cartoonists talk about comic books on a podcast -- well, then, boy howdy-howdy are you in luck. Because The Comics Alternative Podcast talked to some of the cartoonist-type folks sitting around behind some of the tables at Heroes Con last week, and I was one of those people behind tables they spoke to...uh...last week. They also spoke to Eric Powell, Peter Bagge, Maris Wicks and a few other folks wishing someone would just friggin' buy something already while they were sitting around doing a podcast interview and screwing up a sketch of Thanos. The Heroes Con episode of the podcast can be found here.

Finally, there's a write-up on The Beat of the Humor in Comics Panel from Heroes Con. That panel...well, look, forget it. I don't want to get into it. It was a fun panel, on the whole. But if you were there, well, for once it wasn't something I said that sucked the air out of the room and created an uncomfortable moment or three. Maybe we should have managers to handle interviews for some individuals like they do in professional wrestling. Have a Grand Wizard of Cartooning or a Bobby "The Brain" Heenan-type do the talking for folks who tend to put their foot, ankles and occasionally legs in their mouths. All Grand Wizards of Cartooning and Comic Book "Brains" please take notice, I see this as a potential growth industry as conventions continue to take over the world and cartoonists continue to be fairly unsocialized creatures.

Anyway, there you go, a big dollop of comic book talkety-talk talk for you to do with what you will.
Collapse