Hey. Nothing really going on of any note, unfortunately. Beasts of Burden is still not scheduled. The animation stuff we worked on is still in production or gathering dust or lost in a drawer or something. The comic series I pitched is probably not getting picked up by the publisher I pitched it to, which isn't the end of it, of course, but it certainly wouldn't make for a good beginning. We have some art appearing in upcoming issues of Mad, I was very happy with what we did and hope it prints nicely and looks okay. I have a Dark Horse Presents gig for 8 pages of House of Fun comics, which is cool. Otherwise, things aren't going so hot, except for the actual heat (we hit 93 degrees in the house at about midnight last night, our new record). So, yeah. Staying in there, seeing what happens, hoping things pick up, waiting for the thunderstorms to come and cool the house off a bit.

Anyway, here's a Bill and Ted commission I finished up the other day. I'm trying to catch up on everything I owe folks during the lull. 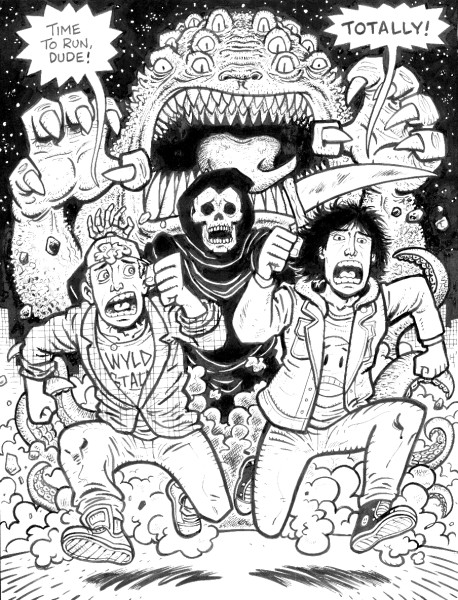 Hope you're beating the northeast heat as best as you can. Later, skaters.
Collapse