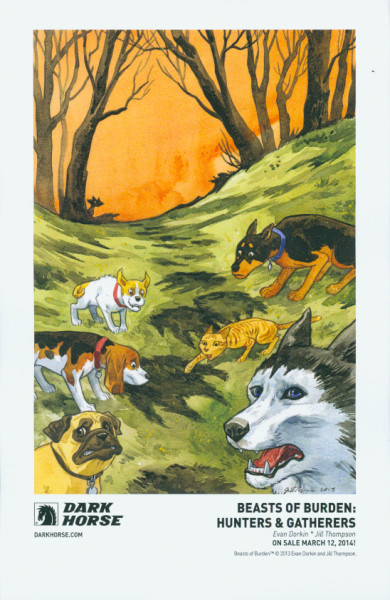 Dark Horse handed out the above card at a signing this past Saturday at the New York Comic Con, it features Jill Thompson's cover for a Beasts of Burden one-shot coming out next March. We announced it at the horror panel on Friday but DHC didn't show any art for some reason (the issue's done) and no one there seemed to take notice, anyway. Rough crowd! Anyway, I did a couple of interviews promoting the one-shot
-- as well as another project that we're going to be talking about soon --  so we should have a little more buzz out there soon.

For the time being: Beasts of Burden: Hunters and Gatherers is a 22-page one-shot shipping on March, 2014, art and cover by Jill Thompson, story by me. The four-issue mini-series we were working on is now being broken up into two one-shots to be followed by a two-parter, all of those comics should see print next year. Hopefully they'll be worth the wait.

I'm just happy we finally got something scheduled after all this time. Sheesh!
Collapse