Changed the name of the blog. Big news, I know.

It's also the name of my Tumblr, which Sarah set up for me a few days ago. I'm not doing much there right now because I'm busy as hell, but eventually I'll be posting more art there, and maybe other crap, with some regularity. Who knows.

I'm trying to cover all the bases as best as I can -- except Facebook, which I just don't like -- since we don't have a living website anymore. Which kills me, I'd really love to have a decent resource for my work that people can refer to, something about my various ongoing projects and books in print, a webstore for art with images and everything like a real, grown-up cartoonist. But I'm computer-illiterate and we don't have time to devote to putting anything serious together, or money to hire someone to set up a site, and we don't want anyone working for free, so, no website for the foreseeable future. But I'm on Tumblr and maybe that will help. I really have no idea.

What made me decide to do the Tumblr thing was that someone posted a Beasts of Burden short story on there a few weeks ago and it ran up almost 60,000 notes, which even if you halve that number to account for people both liking and reblogging the post, means almost thirty thousand people read it. And it's still getting tossed around and read. A small percentage of these folks ordered the book and a lot of people commented on the material and gave the series some very positive word-of-mouth. This is the biggest burst of activity generated by the book since, well...maybe ever. It got more readers than anything we've published, and at a time when the series is in hibernation, to boot, so we can certainly use the attention. Anyway, I figured it couldn't hurt to post my stuff to Tumblr and see if anything happens. Even a few folks seeing it is better than nothing. There's only so much you can do, especially when you don't have time to do much, and every little thing helps. So, yeah, I'm on Tumblr. Big news, I know.

Otherwise, Sarah's almost done coloring the gag pages we're doing for Dark Horse Presents, and work proceeds on the first Eltingville Club one-shot. I can't wait to finish this project up for so many reasons, a big one being that I don't want to draw overly-detailed, fussy, OCD-mandated comics anymore after this. Less panels, less kibbitzing, less eyestrain, more pages, a little more sleep. Maybe. The same goes for doing Fun Strips five-per-page with a title when everyone else does one or two gags on a page and fills up a book. I can't work like this anymore, there's no point and all my work could be spread out over multiple pages and books instead of filling up every inch of white space on every piece of bristol board I tape down to my table. I think I can relax after overworking pages for twenty years, for good or bad, through no one's fault but my own. Hopefully I'll figure something out and be able to work towards simplifying my pages and panels and scripts (and posts, even), so I can get more done in a more practical manner. And still do solid work. Just spread it out a little more.

We'll see how that goes. I'm sure it'll be a long process, and I'm sure I'll never stop putting extra details and business into my comics, but it's something I really have to work on. I'm not getting any younger, or healthier, or richer (ha-ha), and I need to produce more work in a less stressful manner to offset those things to some degree. If only saying it could make it happen. Stupid brain. 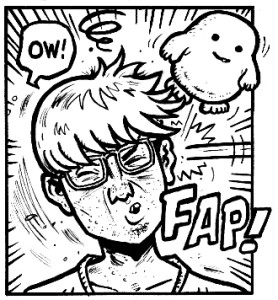 Two last things -- I'll be personalizing and sketching bookplates in copies of Beasts of Burden and Milk and Cheese once again for this year's holiday fundraiser effort for the Comic Book Legal Defense Fund. Other creators who will be signing books and stuff includes Alan Moore, Jeff Smith, Brian K. Vaughan, Paul Pope and other people you may have heard of. Details can be found here.

And our fourth Metal Men cartoon short ran earlier today on the Cartoon Network -- we haven't seen it yet, but we just saw "Identity Crisis", the third short, which has been uploaded to the DC Nation site. You can see it here, along with the first two Metal Men segments (scroll down a bit to find them).

All for now. Back to work, putting too much on a page.
Collapse