So, here's the last few weeks:

The anniversary signing at Comic Book Jones went really well, we even sold a few copies of the Beasts of Burden collection, which is always cool. I stayed a while and did a bunch of drawings for folks, didn't get to everyone, hopefully next time I can make up for that. Took home some comics with store credit from the signing, including the Sunday Peanuts book from Fantagraphics. It's a lovely book and Emily went through it before I did (as usual, these days).

My daughter's been on a real comics tear recently, in the last month or two she's gone through Peanuts from 1950-1970, all four Captain Easy volumes, Prince Valiant vol 1-7, Herbie Archives vol 1-3, Magnus, Robot Fighter vol 1-3, a batch of Batman Archives, the first 50 issues of Amazing Spider-Man (again). the Gil Kane Spider-Man Artist's Edition, Fantastic Four Omnibus vol 1-2 (again), Kamandi Omnibus vol 1-2 (again), The Challengers of the Unknown Kirby Omnibus, all the Tintin books (except Soviets and Congo), Kitaro (again), Princess Knight (again), Chi's Sweet Home vol 1-7 (or whatever it's up to, the new one was at the library today), a batch of Little Lulu volumes, a batch of Adventure Time comics, Popeye vol 1-6, the Walt and Skeezix run, The first Silver Surfer Masterworks, Unico (again, she was unhappy with it the first time because it's kinda sad, but she's okay with it now), The Demon Omnibus (again), The Newsboy Legion Omnibus, The Kirby Fourth World Omnibus volumes...cripes, I give up. I've officially ruined my kid's brain. And I'm jealous she has time to read comics like a...like a kid. How dare she.

Emily turned nine a few days ago, her godparents visited and stayed with us a few days and we had a lot of fun celebrating the holidays and Em's birthday. I got a batch of comics/comics-related presents, the aforementioned Challengers Omnibus, the first Saga and Fatale trades (my first advocacy gift comics), the first Amazing Spider-Man Omnibus (thanks to my brother-in-law, of course Emily took it away from me), the second IDW Alex Toth book (thanks to my mother-in-law, who also sent the awesome Maurice Noble book and the Criterion edition of I Married a Witch) and a nifty Tezuka t-shirt (part of my gift haul from Sarah). Emily made me two versions of Stitches from Animal Crossing out of perler beads. She made out like a bandit between Christmas and her birthday, she finally got the Skylanders Giants game she's been wanting, we've been pretty smitten with the figures for a while now so it's nice that she can finally play it. And I'm jealous she has time to play games. What is it with kids?

The breathing problem had a mild resurgence after the CBJ signing, the cold weather was giving me some irritation, but that's all calmed down for the most part. By the time I got my chest x-rays done the antibiotics did their job and there wasn't any trace of the the bronchitis or pneumonia or whatever it was. I still have some minor issues, apparently when you get this sort of thing the coughing and wheezing and breathing crap lingers a while. No big deal, I'm glad it wasn't anything super-serious, although shoveling snow tomorrow will mean hitting the inhaler a few times. The real goocher is the time lost from being sick, my already tight schedule is now a state of emergency as I try to get the Eltingville stuff done. 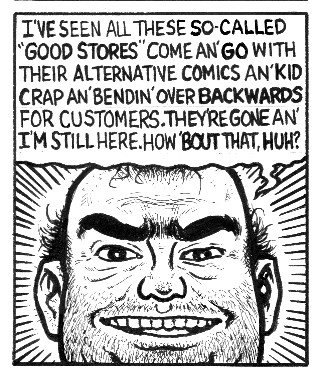 It's going to be a long winter, but hopefully all will go well. I'm mentally kicking myself extra hard for doing so many dense pages in the first issue, it's even more stuffed than I'd expected. Eltingville has always been a text-heavy, multiple-paneled mess -- I couldn't see changing that approach this late in the game, but, man, I could be getting two or three comics out for the work I'm doing. Which has always been a problem with my work. But when this mess is over and done I've got to sit down and rethink the way I do comics. I can't keep putting so much on a page, it's not really doing anyone any good at this point, especially when income and age and eyesight and everything is factored in. It'll be interesting to see if I can actually work this out for myself.

Sarah and I put together a t-shirt design for The Exceptions, a band we did a bunch of art for many years ago during the Third Wave ska days. They're playing the Jump Up! Records Anniversary Show in Chicago. We did work for Jump Up! as well, back in the day. Time flies when you're having back pain.

Anyway, here's where we go from here:

We'll have the Beasts of Burden: Hunters and Gatherers one-shot out, then the two Eltingville Club comics, and then eight pages of Fun Strips running in Dark Horse Presents. If all goes well we'll have a second Beasts comic out later this year, more if we're lucky. Once the Eltingville Club is dead and buried I've got one or two things to do and some other stuff I'd like to do, and of course who knows how that will work out. And while all that's going on we should find out if Reel FX wants to keep playing with the idea of a Beasts movie or not.

So, the next few months should be interesting. I've got paper and at least one new brush pen and we're stocked up on Tylenol.

P.S. Hope everyone had a nice holiday and hope 2014 is kind to us all.

P.P.S. Fingers crossed. All around.
Collapse