We'll be appearing at the Asbury Park Comic Con next month at the Berkeley Oceanfront Hotel in Asbury Park, N.J. The show has expanded to two days and has a larger guest list this year, I assume that will mean more exhibitors (they'll be posting exhibitors soon, I believe). It's a really fun show, all about comics, sort of a cross between Heroes and SPX. Sort of. Whatever.

There will also be panels and...after checking the page it appears the panel that Sarah and I were asked to be on has been dropped. Which is a-okay with me. I talk enough already without being asked to.

Anyway, the show has a great vibe and Asbury Park has good food on and around the boardwalk and the awesome Silver Ball Pinball Museum arcade is there. Kathleen Hanna's band The Julie Ruin is playing Asbury Lanes on the 12th (and there's probably other local shows going on, I assume), so there's a lot of reasons to take the trip out and do the funnybook show thing at Asbury in a few weeks.

We'll be hauling books and art and whatever odds and ends we can find so we can attempt to trade them to people for money. I wish The Eltingville Club #1 was going to be out (April 23rd), but we will have copies of the new Beasts of Burden: Hunters and Gatherers one-shot (FYI: House of Fun and Beasts of Burden: Neighborhood Watch are out of print and gone, so we won't have those at the table anymore. Someday, they will be collected. Yes. Someday.)

Hope to see some of you folks in Asbury Park next month. 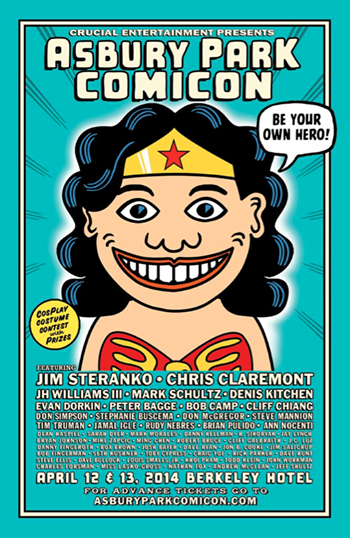