Paraphrasing what I wrote on Twitter, Kurtzman was Kurtzman -- and all credit due -- but Feldstein's Mad was what I grew up on, and it was a major, major, major influence on me and a ton of other idiots. And as for the EC Horror Comics -- formulaic? Yeah. Often ripped from other sources? At times, sure. Fun-as-hell, influential, comic book awesomeness? Most definitely. I love these comics, even as I'm aware they're pulp and were often churned out and aren't the highest expression of self-expression known to the medium of comics. That's okay, I don't care, I'll take them.

I met Mr. Feldstein twice. One time was at San Diego, I think it was 2000, the last time I attended. I stood on line to have him sign a book about EC (yes, I get books signed at shows, I'm a fan). The writer of the book pointed out who I was to Feldstein, that I was a cartoonist, as if that mattered. It was kind of him, but I was embarrassed, that's on me, not anyone else. I get embarrassed. Feldstein was gracious as he signed my books and we spoke for a few seconds and I got the heck out of there because there were other fans who wanted their books signed.

The other time I met Feldstein was at a convention in New York. It was at one of the larger Big Apple shows, th National, if I remember correctly, at the Metropolitan Pavillion. Feldstein was a guest and was sitting close to where I was set up in the upstairs artist's alley. On Sunday -- which is often a slow day at shows -- there wasn't much doing and not only was business dead where I was, but also at his table. Which always floors me, when the veterans with decades of experience making influential comics sit at shows with no one in front of their tables. Anyway, I was sitting with cartoonist Christine Norrie, and we were talking, and for whatever reason, I got the idea in my head to go over to Feldstein and blather on about how Mad and EC were a huge influence, blah blah blah, and show him a copy of the most recent issue of Dork, which would show him I wasn't lying -- I was for real a humor cartoonist, influenced by Mad, blah blah blah, whoopie.

The problem was that despite what some folks might think from my work and my on-line writing and any interviews they may have heard done with me, even though I'm an opinionated motormouth I am not super-good at introducing myself to people and speaking to them, especially comics creators whose work I like to the point where I'd stand on an autograph line with one of their books. Christine told me I should go talk to him, and I kept putting it off. Eventually, I did go over. He was very, very nice, and we chatted for a short while. He gave me his card, or his card was out for anyone to take, I don't remember. I still have it, along with other business cards I keep as small mementos of my time in comics. And I gave him a copy of my comic. Which is something I almost never do, and something I immediately regretted, for reasons I won't get into, but let's assume they're all something I work on with my therapist every two weeks and move on. And I blather a bit and blah blah blah "I'm a big fan" and finally go back to my table, feeling like a moron.

And I see Feldstein putting his glasses on, and he starts reading my comic. And I feel like a moron. His face never changes. And I feel like a moron. No one comes by either of our tables, to break up the horrible moment for me. Or him. And after a little while, he comes over to my table, with my comic. And he says a few nice, general things to me about my work and gives me back the comic and there's a few more words and he goes back to his table. And I don't remember exactly what he said because I was flushed and embarrassed and the fact that he gave me the comic back made me feel horrible for some reason. Christine told me I was taking it wrong. And, like, of course, duh, what the hell does he need to keep this ridiculous, foul-mouthed small press funnybook home with him? He wasn't going to throw it out, he gave it back, he was kind, he was nice. I was mortified, I felt like I bothered him.

So, I met Al Feldstein. He seemed like a good guy. I was a fan, and I have a lot of respect for his work and contributions to funnybooks and I guess humor and the entertainment field in general. Most of us could only dream about having that kind of impact (no EC pun intended) on our pop culture, entertainment culture, culture culture. And on specific people. Years after I met him I started freelancing for Mad, a small boy's small dream come true, something that means a lot to me for a lot of reasons, one of which is because I grew up reading Mad, and the guy running the show back then was Al Feldstein. I felt badly when I read that he died, even though 88 isn't a a tragedy by any means and I assume he had a pretty darned decent life. I feel badly because we lost Al Feldstein and he was one of those folks that meant a little something to me personally and I would have gladly given him a few more years to kick around in if I had the choice to make. Like Kirby, like Elder, like a lot of folks who sat in front of drawing tables and pushed the ink around. Because I'm a fan. 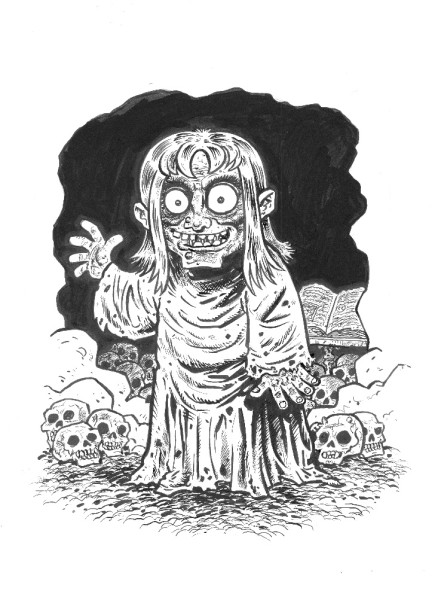