Haven't done a general update in a while. Anyway:

I'm still plugging away at the late second issue of The Eltingville Club. It's been a real mess, every page is crammed-full of OCD art and uncontrolled dialogue. I have no one to blame but myself. I'm really hoping to put enough harpoons in this whale to kill it off next month. If not, please attend my funeral, because I'm going to take the gas pipe if I can't toss this gorilla off my neck. I'm pretty depressed about the whole thing, the comic was supposed to be out in May and the book collection is obviously going to be pushed back, probably to next year. Ugh.

Once Eltingville is done away with I've got a Mad gig lined up and I'll be spending some time drawing commissions I owe some people. I'll probably be soliciting some new ones around then to keep the plate spinning going.

The House of Fun gag strip pages I did for Dark Horse Presents have been re-scheduled for DHP #4, shipping in November. Dark Horse will also put out the Hellboy: Weird Tales hardcover collection in November, which I have a story in.

Also coming out in November from Marvel is Deadpool Classic vol 10, which collects an Agent X two-parter I wrote and the 1993 Fight-Man One Shot I wrote and penciled.

The toy company Neca has released a 7" action figure based on the "rogue" Predator character from the Predator: Bad Blood series I wrote for Dark Horse Comics back in the '90s (these days available in the Predator Omnibus series vol 3). The series was drawn and the character designed by artist Derek Thompson, his art is also being used for the packaging. The Neca page for the figure is here, a write-up on the figure which includes photos of the packaging is here. There's a second Bad Blood figure coming out based on another character from the comic, which they've dubbed the "Enforcer".

Beasts of Burden: Animal Rites is now in a fifth printing. The book hit its four-year anniversary in July. I wish I had concrete news on when the next new issue of the comic will be done. Let alone the follow-up two-parter. And the second collection. Yeah.

I don't really have much work lined up for the future because of Eltingville wrecking the schedule, and that will obviously need addressing. I've been discussing a few things with a few people but nothing's nailed down. An editor at one known-quantity publisher contacted me about work, but never returned my e-mail follow-up. Dark Horse has shown interest in a pitch I sent them but the project still needs an artist. I'm working on another series pitch, something I'd be drawing, but that's a way's off even if it was magically picked up by a publisher today. I've got a few things I'd like to write, some short stories and a longer one-shot horror project, I'd like to do more House of Fun material, but these will need pitches, artists and whatnot. And almost no one's looking to pay anything for creator-owned short-form stuff, so, yeah, not really a viable business plan, eh?  Most likely I'll be trying to scratch up some work-for-hire stuff unless/until something breaks. Who knows. In a perfect world I'd be working on Beasts of Burden. We all know the world is far from perfect, and screwy comic book schedules should be the worst problem any of us should have to face.

All right, gotta go eat something and then catch the work train to Eltingville. Choo-choo. 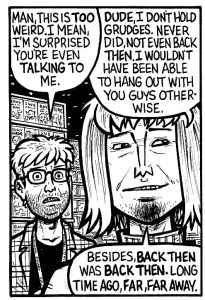 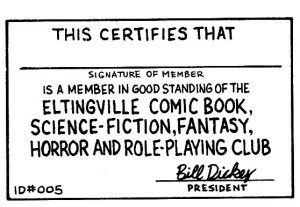