Dark Horse Presents #4 ships on November 19th, and will feature 8 new pages of HOF Fun Strips (with color by Sarah).

Comic Book Resources put up a preview of the issue and there's a full page of strips for you to look at if you so desire.

Old-timey HOF readers will (hopefully) be happy to hear that the return of the Fun also means the return of Myron the Living Voodoo Doll, Broken Robot, The Shitty Witch and the Crappy Cat, and even Phil the Disco Skinhead. And a Georgina Riley cameo, to boot. I forget who else shows up. Maybe The Man Upstairs. I did these last year and they got bumped when DHP was relaunched so I'm going on memory fumes here. Oh, yeah, the Cherry Clan make a cameo, but I didn't create them, I just appropriated them from Ferrara Pan a ways back for a dumb two-pager. I threw them in there for my pal Socko of Comic Book Jones, although he won't know until it comes out because, like most folks -- even those who follow my work -- he doesn't read my LJ blog.

I've got three other things to plug this month, which is nice to say after experiencing a dry spell of new releases -- not helped in the least by the delays affecting Beasts of Burden (not my fault, and I wish I had some news as to what was going on there) and Eltingville Club #2 (totally my fault). Here's we go:

The Hellboy: Weird Tales anthology is being re-issued in a new, complete hardcover from Dark Horse featuring folks like Craig Thompson, J.H Williams III, Gene Colan, Cameron Stewart, Jill Thompson (wonder what she's been up to these days?) and many others. I did a10-page Roger the Homunculus story for that, with colors by Sarah. It's about Norwegian Death Metal cultists, a series of church burnings, two unrelated murder investigations, Quizling mad scientists, Frost Giant clones, a hidden monster and job-related depression. More plot in 10 pages than some graphic novels, for what it's worth.

Deadpool Classics vol 10 from Marvel (shipping Nov 5th, according to their website) collects all the Agent X "Let's-screw-Rob Liefeld!" hoo-hah from the early part of this century in a continuing effort to wring all the blood out of the cosplay-favorite mid-carder they can. Which is fine by me, because it reprints -- against all odds --  the two-issue Agent X arc I wrote that allowed me to bring Fight-Man into Marvel continuity, as well as the original Fight-Man One-Shot I wrote and penciled way back in 1993. The Agent X stuff was drawn by Juan Bobillo and Marcelo Sosa (who should have been given way more work, they're a-okay) and is a hoot, imho. The one-shot suffers from a terrible, rushed coloring job and I assume the 90's-era print job will look even more awful on slick paper than it did on newsprint. But the jokes are there, and I think they'll hold up. My favorite thing about Fight-Man is the hundred-plus villains I came up with for him to fight, I love creating and naming stupid villains and I think these are some of my best (The One-Man Atrocity, Atomic Lou, The Plug-In Maniac, DoctorAngutan, The Shiv, The Roman Candle, Punchdrunk, Illbilly...you get the idea). Also, Fight-Man's a pretty early example of the pathetic fuck-up/actual loser as superhero, which has gained a little bit of pop culture traction since, and might be of interest to some folks out there with too much time on their hands. I'm grasping at straws, I know, for my place in anecdotal comic book history. Sorry. I turn 50 next year, and cry a lot these days when I think about what I've done -- and not done -- with my life. Anyway, people will come to this for the Gail SImone work, and I hope they are pleasantly surprised by the Fight-Man stuff I have in there. It's nice to have that stuff back in print, I must admit. Now if only DC gave World's Funnest a break, right?

Sarah and I will also have some new work out in Mad Magazine in a few weeks. It's this year's Chilling Thoughts feature and I drew the hell out of it. Honest!

And I swear, Eltingville is getting closer to completion. I'd cross my fingers, but my hand's too cramped up. You'll see why. 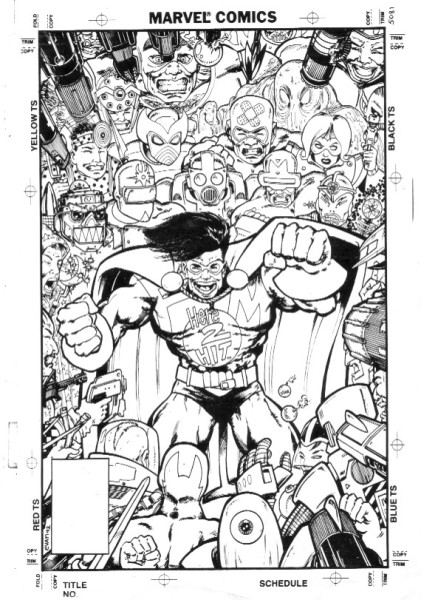 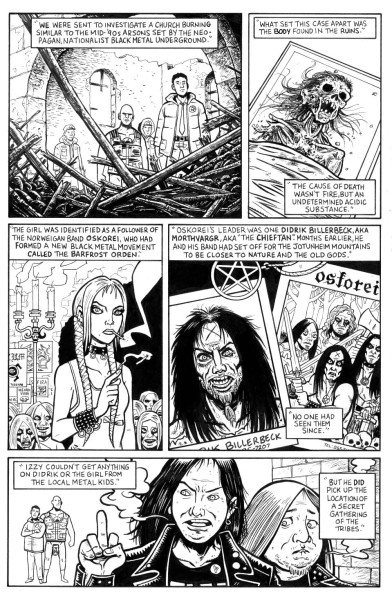 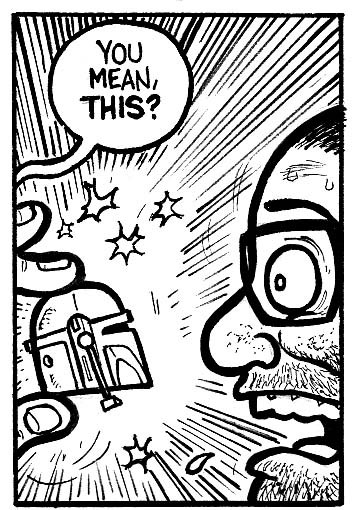