NYCC was super-productive and super-ridiculous and super-exhausting. And I was only there two days, one with the family, one with the industry. My signing went better than expected, we sold some books, talked to some people, hopefully set some things in motion.

It was great meeting our Eltingville Club editor, Daniel Chabon, in person, and seeing all the folks from Dark Horse. We also got to meet some fo the folks from the digital app project we're involved with, and say hello to a bunch of folks we've met before, and hang out at a few tables in artists alley and all that kind of thing. On Saturday I had a long (and unexpected) talk with Jill Thompson. It was a good talk, and we're continuing to talk, and she was working on new Beasts pages before we ran into one another. Since the show I've seen new art, beautiful as ever, and I'm really hoping we might be back on track and have new stories out next year. I think we will.

The only real downside of the convention was that I came down with the con crud after Saturday, which turned into the con plague (as some are referring to it), which landed me in bed for several days. I then transmitted the plague to the family, because I'm the gift that keeps on giving. I'm still sick, almost ten days later, with a head full of rot and a nose full of snot. Today's the first day since the show I've been able to be semi-productive. Sarah's wrecked and Em's losing her mind from cabin fever, not to mention getting over her actual fever. This was the worst post-con illness we've ever had,. Work has piled up badly and we spent Sarah's birthday conked out. sick and useless. Hopefully we'll all recover soon, and get things in some sort of order.

Before I knock off, let me mention that last week the Peanuts Tribute book came out from BOOM! Studios, with a slew of creators and a 12-page Schulz/Lovecraft mash-up by me and artist Derek Charm. End of plug. End of post. 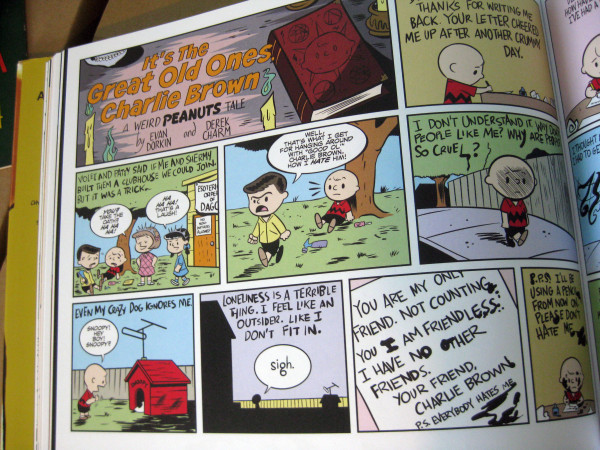